Once again Buenos Aires dressed up to celebrate the excellent selection of national and international films (feature films, documentaries, medium and short films) that participated in the 7th edition of the Non Stop Art Festival -ANSFF /BA22-, with its captivating hallmark of combining films with the exhibition of works of art, paintings and sculptures, related to cinema and series.

Among the directors and personalities of cinema and art who participated in the Official Selection of the ANSFF /BA22, we can highlight the famous Spanish filmmaker, CARLOS SAURA, with his film ROSA ROSAE, a Spanish civil war elegy, who received a special award from the Festival for his more than 50 years of experience as a film and artistic director, in addition to the award for Best Director in his category. In the selection of artists, the Opera singer RAINA KABAIVANSKA stood out, renowned Italian Soprano, who shared the stage with figures such as LUCIANO PAVAROTTI and INGAR WIXEL, received a Special Prize from the Festival Committee for her career, in addition to the prize that was awarded to the Director NAYO TITZIN for his Documentary LA SCUOLA RAINA KABAIVANSKA, about the life of the aforementioned artist. Being the singer also honored at the time of the award nominations, with a brief repertoire in the voice of the Lyrical Singer Marco Lastra, who is part of the Festival Jury and Committee.

The excellent Documentary works have the special participation of national artists such as VILMA PALMA E VAMPIROS, celebrating 30 years of their musical debut on the Santa Fe stages, commemorated in the film 30 YEARS OF LA PACHANGA, VILMA PALME E VAMPIROS, directed by Eduardo Sànchez - Award for Best Documentary Production-, as well as with international artists from different branches of art, such as the Tango dancers Joao Carlos Santos David & Mirella Santos David, and the poetry of Paul Heaney, awarded for their participation in the film DE FLOREO; and the Tango couple composed of Amyra Badro & Tiberiu Mihai Pepencia, also awarded for their artistic participation, in the film LAST TANGO IN CONSTANTA, by Romanian Director Robert E. Popa.

A wide variety of painters, poets and sculptors complement the list of award-winning artists, along with Directors, Producers and different filmmakers who have been part of the relevant figures of the OFFICIAL SELECTION of this 7th edition, in the categories of Feature Film, Medium Length Film , Documentary, Short Film and Animation, which will be able to appreciate the complete list of winners and special prizes in our Awards & Special Mentions section, on our official site of the Arte Non Stop Festival / BA 22.

A New Festival is born in Romania - C.I.F.F.

Arte Non Stop Festival has the great pleasure to tell you that from May 2021, the first edition of the CIFF - Constanta International Film Festival will start from the shores of the Black Sea.

The CIFF is sponsored by our ANSFF, in addition to forming a strategic alliance together, uniting producers, directors and filmmakers and artists from Argentina with Romania, once again through cinema.

Robert E. Popa (Romania) and Timothy M. Brice (L.A -USA), both founders and directors of the Festival, have distinguished us by adding our Director, Gabriel Fiorentino, to his staff as Co Founder and Co Director of the Constanta Internationl Film Festival, together to them.

We wish them a great success and very soon we will share news from the first edition of the Festival, from the shores of the Black Sea.

We invite all our friends to participate in the CIFF with special discount participations for being a Festival Associated with our Non Stop Festival Art. 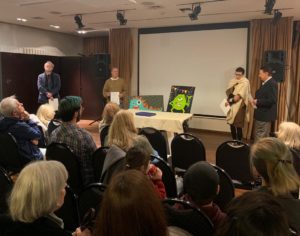 The Fourth Edition of Our Art Non Stop Festival was held this year at DOM POLSKI - Polish House, Headquarters of UPRA and ACAP - Polish Union of the Argentine Republic, and of the Polish Argentine Cultural Association.

We were honored to be accompanied by Members of the Polish Embassy, including Mr. Cultural Attaché of Poland in Argentina, who together with the UPRA and ACAP authorities, shared their Cultural Space to receive our Non Stop Festival Art, represented by the Festival Director, Lic. Gabriel Fiorentino

We also have the special presence of the Ambassador of Romania Mrs. Carmen Podgorean, special guest, accompanying the films and filmmakers who together with the Argentine and Polish public participated in the special cycles within the ANSFF dedicated to Poland and Romania.

We thank the Ambassadors of Poland and Romania; to whom the Festival Director donated a painting with children's motifs to be delivered jointly between the Embassies and Our Festival, to a health and education institution in Argentina

We also share our special gratitude to the Cultural Attaché of Poland, the Delegates of Culture and Authorities of UPRA and ACAP, together with all Dom Polski Staff for their pleasant treatment and accompaniment during the excellent functions that were developed jointly with our ANSFF Arte Non Stop BA2019 Festival at Dom Polski - Parallel Screen -.

THE  LAST  TANGO  IN  CONSTANTA

A new visit to our Press Office of the Festival fills us with good news. The winning pair of the ANSFF BA2016 Awarded for Best Actress in Medium-length Film, Maia Morgenstern and the Audience Award for Best Director, Robert Eugen Popa, will soon start the Pre-Production of a new film to be shot in Constanta, Romania, with the support of CineMaraton, and Music of Argentine Tango performed by Miguel Di Génova from Otros Aires Tango. 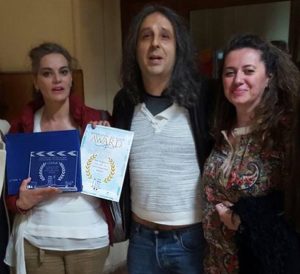 In this very exciting Romanian work of fiction, the infamous Venezuelan terrorist of the 80’s, Carlos the Jackal, escapes from his high security jail in France and tries to hide in a Tango saloon owned by an old friend, on the Black Sea Coast of contemporary Romania. (Constanta).

The moment couldn’t be worse as an exclusive event involving the Argentinian Ambassador and many Romanian political figures will happen in a just a few hours.

Two marginal but effervescent friends from Constanta, Geo and Vali, now retired, on a miserable pension, reject with virulence their own marginal condition and take the Jackal as a hostage, trying to “sell him back”  to the French Embassy,  before the Jackal escape turns into a major "breaking news” on CNN and channels world wide.

Geo, a former Constanta Casino choreographer, small time anarchist  and a vocal Jackal fan and Vali, a former rough, Ceausescu secret police agent in Latin America for many years, that has a bitter pending debt with the Jackal from the 80’s,  try to compromise and release the Jackal before the Romanian Government anti-terrorist agencies storm the Tango Club and the whole situation becomes a bad taste tabloid like media circus.

The film is filled with psychological conflict, mordant political irony, black humour, neo-noir touches and a virulent satire of contemporary Romania. All this embedded amid the  intense nostalgia of the protagonist, who is obsessed with tango, Argentinian wine and Boca Juniors.

A multitude of other actors from Director's Robert Eugen Popa, previous film (Veni,VIdi,Fugi), including - Paul Diaconescu, Tache Florescu, Elias Ferkin - among several others - will return to the set for "Last Tango in Constanta".

The production  stands out not only for its cast, but also has the renowned  Director of photography Viorel Sergovici, who has a career of over 80 films as Director of Cinematography and another 14 as a Producer, noted among other films, for his work in the ANSFF 2016, for which he got the Award for Best Director of Photography in 2016 for "Veni,Vidi,Fugi".

The film script has been written by Robert Eugen Popa, Timothy Brice and Aureliu Mardare.

Given that Robert and Timothy have been awarded with Special Mention for the Best Screenplay for the 2016 ANSFF  Audience Award (Argentina), as well as Best Short Film Screenplay at the Jaipur International Film Festival (India, 2017) and “Honorable Mention” in “Montecatini International Short Film Festival”(Italia, 2016)  for the same “Vini, Vidi Fugi“, seems to us like a strong premise for another successful festival run.

At the moment, and until they reveal to us the name of the Latin actor who will play the "Jackal" in the film, we can only add that the film has the Production and Direction of Robert Eugen Popa, who has obtained distinctions such as the Audience Award for Best Director in Medium Film for “Veni, Vidi, Fugi” in our ANSFF2016, and Best Director in Short Film with Regression in 2012 at the Peloponesian Film Festival (Greece), and that the project has the support of the CineMaraton Television channel, in Bucharest.

The film’s score will be performed by the famous Argentine electronic tango band "Otros Aires Tango", a band recently distinguished with the "National Cultural Interest" Award for its Artistic Values and quality,  by the Government of the Autonomous City of Buenos Aires.

While we wait for a speedy new visit from Robert Eugen Popa to tell us more about this new film – and another Latin American project in the pipeline , we leave you some links to know extra data of the actors , the projects carried out by the Producers, the Director and to enjoy the themes of the soundtrack chosen for the film, Otros Aires Tango. 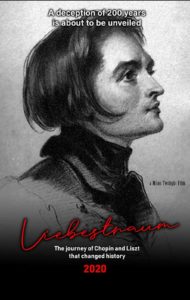 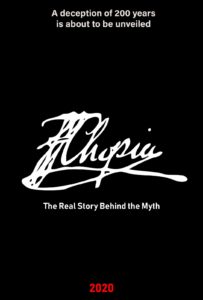 Recently we have received in our Press Office, the kind visit of the feature film director Milos Twilight, one of the talented Filmmakers who have participated in our ANSFF, being awarded in the 2016 edition with Awards and Special Distinctions of our Festival.

He came to present his new projects, a documentary and a feature film, both based on the emblematic figures of the musicians Frederic Chopin and Franz Liszt, the two most important pianist in the world history.

These projects were developed thanks to the exhaustive work of about thirty years of research by the Argentine filmmaker living in Los Angeles and France, Milos Twilight, along with a large group of researchers, institutions and historians from France, Poland, Italy, Swiss, Hungary, the Czech Republic and Germany.

From these findings and new revelations, a new mega project was born, divided into 4 installments:

The shooting of these films are planned to be carried out in the original locations where the historical events took place, traversing the "never seen before" documented facts of the characters through the plot within the imposing landscapes and locations of Poland, Hungary, Italy, Czech Republic, Germany, Swiss and France, and in cities such as Warsaw, Dresden , Berlin, Vienna, Venice, Geneva and the glorious Paris.

This colossal project has involved the Producers Andrew Vajna, Donna White, Milos Twilight, Brigitte Guillon and Gabriel Fiorentino; with Milos Twilight as the Writer and Director, in addition to the special participation of Jean Claude Menou (former Director of Heritage of French Culture) as narrator of Documentary.

It should be noted that these Projects have the Cultural Interest and Support of renowned personalities and cultural entities from around the world, including:

Pretty soon we will have more juicy details and information, but for now, we share this advance with you: